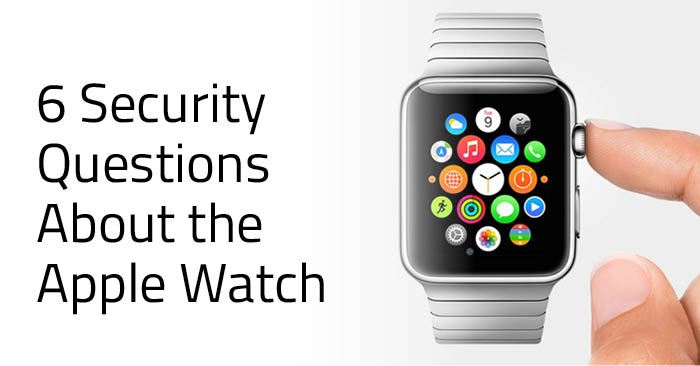 The Apple Watch offers a revolutionary new way for people to track their fitness levels and maintain their online activities. Watch owners can download over 250 health-related apps from the Apple AppStore. They can also compose texts, post to social media, listen to music, and buy goods and services with Apple Pay.

People who wear the watch next to their skin each day would likely agree that it’s a highly personal device, which begs the question: How secure is the Apple Watch? Here are six common questions people are asking about Apple’s newest wearable gadget.

Could a Thief Access Information From a Stolen Apple Watch?

Apple Watches are pass code enabled. If an owner is wearing his watch, he doesn’t need to enter his passcode to use it. The moment he removes the watch from his wrist, however, the device locks up. A thief would have to enter the correct code to enable a stolen Apple Watch.

Could Apple Pay Credentials Be Stolen from an Apple Watch?

If an Apple Watch falls into the wrong hands, the Apple Pay credentials therein could theoretically be stolen. However, the thief would have to correctly enter the watch owner’s code to access the information.

How Do Watch Owners Obtain a Secure Pass Code?

What Happens When a Watch Owner Forgets His Pass Code?

If a watch owner forgets his passcode, he must erase all content and settings from the watch. This won’t be catastrophic as long as he’s backed up his iPhone to iTunes or iCloud. After an erasure, a watch must be synchronized with the owner’s iPhone again. An option to “restore from backup” conveniently presents itself during synchronization.

Could an Apple Watch Be Hacked?

With so much personal information stored on an Apple Watch, it’s natural for consumers to worry that a thief could hack into the device and steal sensitive data. Luckily, most of the data found on a person’s watch is actually processed on his iPhone, not the watch itself, and an iPhone would be a much more valuable data source for a thief than an Apple Watch. Although it might be possible for a hacker to attack someone’s watch, it’s not a likely threat.

Could an Apple Watch Get a Virus?

iPhones aren’t likely to contract viruses. As such, neither are Apple Watches. While it’s possible for a hacker to place malware on a smartphone, it’s not likely. The reason: PCs are much easier targets. Nevertheless, it’s best to exercise caution when it comes to email attachments, public WiFi, and other known security dangers.

The new Apple Watch sells for anywhere between $350 and $17,000. Consumers naturally want to protect their investment and their data. Like all digital devices, the Apple Watch could potentially fall prey to hackers or other thieves. Fortunately, the watch isn’t as vulnerable to security threats as the everyday PC.